Lauren Daigle grew up imitating some of the greatest voices the music industry has ever heard. With her new album, she’s making her case to be included among them.

Lauren Daigle makes her full-length debut this month with the inspirational How Can It Be after releasing an EP that showed hints of her tremendous vocal power, a talent that’s earned numerous comparisons to Adele. If that sounds like a stretch, take one listen to songs like “I Am Yours” or the title track to hear the similarity between the two performers.

Daigle grew up in Lafayette, Louisiana, singing along to the memorable choruses and unrivaled voices of Whitney Houston and Celine Dion. Her mom called her house “The Music Box” because Lauren was always singing.

“I would walk around at 5 years old singing Whitney and Celine,” says Daigle. “[My parents] would always know I was awake — not from seeing me but hearing me in the mornings.”

Daigle credits her parents for two particular facets of her musical make-up that made a strong impression at an early age. One being a game her father developed simply by guessing songs and artists that would play on the radio, resulting in a strong musical vocabulary for young Daigle.

“My dad used to play this game with us called ‘The Dollar Game,’” she says. “When we were in the car, he’d turn the dial to a classic rock station — he loved Led Zeppelin — and would say things like, ‘If you can guess who sings this song, I’ll give you a dollar. If it’s really hard, I’ll give you five dollars.’ It taught us as at a very young age to listen for different sounds, tones and styles of music, which proved valuable in a lot of ways.” 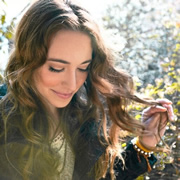 “This story involves a planter, one that we used for a tree, that was placed at the front of our house. One particular day when it rained, it filled up with mud and looked just like chocolate milk,” she recollects. “After telling my mom about it, she suggested that we make a book about ‘my day with the chocolate-milk-rain.’

“So I remember putting together this book complete with pictures I painted. My mom stapled it all together, which then gave me a tangible memory of my day. I think that creativity eventually trickled into my songwriting. It was taking a moment to look at a story or a picture that God had shown me and then incorporating that into a song.”